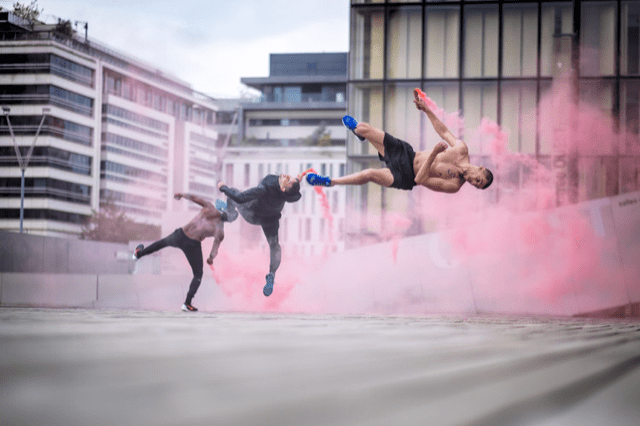 Tricking is a training discipline that combines kicks with flips and twists from martial arts and gymnastics as well as many dance moves and styles from breakdancing. It aims to achieve an aesthetic display of different combinations of “tricks”. Tricking practitioners are commonly referred to as trickers. Examples of tricking techniques include the 540 kick, the corkscrew (cork), the flashkick, the butterfly twist and the double leg.

A tendency to exhibit techniques that are more flashy and complex was observed in martial arts during the period following the 1960s, predating the current tricking movement. Especially in taekwondo, an increasing emphasis on spectacular spinning, jumping or flying kicks developed during the mid-1960s with the introduction of international competitions.

The actual sport of tricking is an internet phenomenon, emerging in the early 2000s. Xtreme Martial Arts is thought to be a close precursor to the sport, being shown at various martial arts tournaments in the 90s and early 2000s. By late 2003, the online tricking community was well-developed, bringing trickers from across the globe together. With the rise of YouTube, trickers were able to share their videos with others, and the discipline experienced a massive rise in popularity and interest.[citation needed] Since the beginning of 2008, tricking has been receiving much wider publicity and popularity among the general public due to efforts of popular tricking teams.

Check out the full #USWA2022 program (Dutch only)
show me
Sixteen of the best tricking athletes came to Atlanta and battled head to head for the winning title.