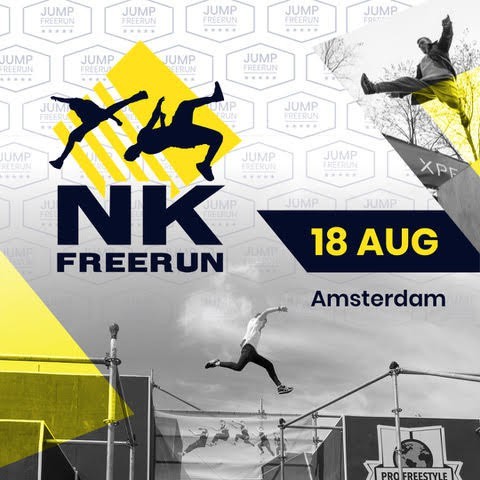 AMSTERDAM – It has been almost 4 years since a official Dutch freerunning championship (NK) took place. After 2 editions in The Hague corona threw a spanner in the works but now the city of Amsterdam provides the location for the event. In collaboration with organization JUMP freerun and under the auspices of the Royal Dutch Gymnastics Union this edition will take place on August 18 at sports park Riekerhaven. During this kick-off of the Urban Sports Week Amsterdam, the 30 best freerunners, both men and women will compete for the title “Dutch Freerunning Champion”.

The participants in the NK are selected based on previous performance and or from an online selection procedure. Athletes from all over the Netherlands could send in a video in which they could show their skills. A jury has selected the best and they will show their jumps and tricks to the public on August 18 during the semi-finals.

Noa Diorgina Man (17) is a JUMP freerun athlete and she also participates in the NK. Last month at the World Games in Birmingham, USA, Noa won a gold and silver medal for the Dutch Team. Noa has been doing well in the world top for a few years now and as current World Champion she will be keen to live up to her status as best ‘Dutch’ freerunner on 18 August. Whether she or someone else will take the title can be seen live at the NK freerunning in Amsterdam.

All there is to do in district East during USWA